Two days ago I went to the Hunua Falls and was inspired to write this post. Waterfalls aren’t my favourite subject and it’s easy to make dull photos of them, but a few simple techniques will give your photos a lift.

Click here to see more photos from the falls.

1: Include a person for scale

Put your thumb over the man in the photo below and your sense of the waterfall’s height disappears. Part of telling the story of your visit to a waterfall is showing viewers how high the waterfall was and the simplest way to do this is to include a person, preferably one who is the same distance from the camera as the waterfall is. Including people in landscapes also gives viewers an emotional connection with the image.

If you have a waterproof camera or an underwater housing such as a Dicapac you may be able to get close to base of the waterfall and make a photo that is different enough to arouse the viewer’s interest. For the shot below I was one step away from swimming and about ten feet away from the waterfall. There was so much water in the air that I was looking around for the soap.

Vegetation can be a nice soft frame around your waterfall. Having some in the foreground gives the photo a sense of depth.

When people stand and point at the waterfall there is interaction between the people and the scenery which ties the elements of the photo together. This is much more interesting than having people who are just standing there (compare with the example above at “Include a person for scale”).

How much motion blur is good? That’s a matter of taste. Personally, I don’t like the cotton wool look but I do like to have enough to make it obvious that the water is moving. For the photo below I used a shutter speed of 1/160, but this is only a rough guide because the same shutter speed will give different results when the speed of the water changes.

Note that the mono version of this photo give a stronger sense of motion than the colour version above does. This happens because mono emphasises light/shadow, shape, and texture: shape and texture convey motion blur, so mono often strengthens the message that motion blur gives to the viewers.

Practical tips for photography at Hamilton’s Gap (and some photos)

In August 2011 I went to Hamilton’s Gap with friends from the Manukau Photographic Society. It’s a particularly rugged and wild west coast beach that brought to mind the phrase “magnificent desolation”. I couldn’t find any useful information before I went so here’s a few tips for you:

If you like beaches that have a wild edge and few people then Hamilton’s Gap is well worth a visit. 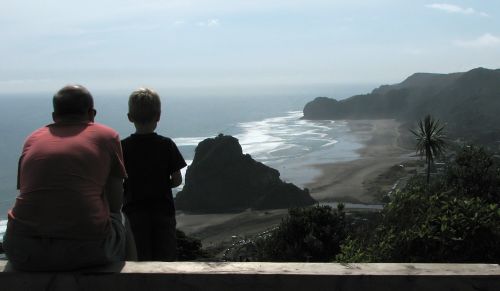 I went to Piha (map) on a fine Sunday afternoon with a group from Manuaku Photographic Society. It’s a well known surf beach and the photo on the right gives you an overview: Lion Rock is to the right of the boy, South Piha is on the near side of the rock, and – wait for it – North Piha is on the far side of the rock. All the on-beach photos that you’ll see here were taken in an area that is slightly north of Lion Rock.

Please note that all the photos can be enlarged: just click on a photo, then click again.

Piha is a very dangerous beach for swimmers and just before we arrived a boy went missing: we saw helicopters, a small plane, a jet ski, and surf lifesavers searching for him. The next five photos show scenes from that search, including lifeguards in red and yellow uniforms:

END_OF_DOCUMENT_TOKEN_TO_BE_REPLACED

A bee in a bind 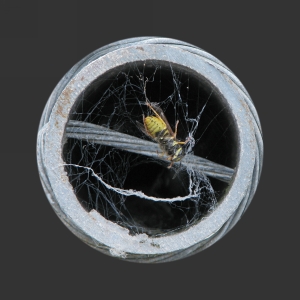 You may be thinking “Why take a photo of a bee in a cobweb?” Well, why not? It’s hard to make a photo of a dead bee that doesn’t bore people to death, but this scene caught my eye due to the wonderful framing given by the tube. I also like the way that the bee is dangling in a pathetic manner that portrays his plight (the photo has not been rotated). I tweaked the exposure, cropped, and added a background, but otherwise the photo is as shot.

I like to take photos with a subtle touch of the unusual, and I think that I’ve succeeded here 🙂

Thank you to those observant people who have pointed out that this is in fact a wasp. In this case I’ve chosen to exercise poetic licence.